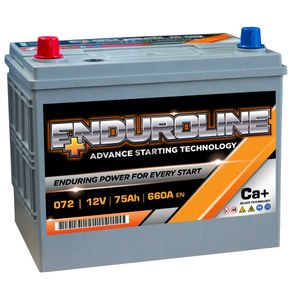 A good battery that cranks my big V8 without a problem. Very good value, comparing favourably with the competition Superbly packaged for transit.

This is a good spare battery for my defender. It’s as powerful and will last almost as long as my odyssey battery which is 5 times the price

All good so far, exellent service. Thanks

Even though I ordered the same battery code (072) as was already in the car this one is much bigger and only just fit in the space available. It does made light work of starting the car though. The only reason I have marked it down a star is due to the packaging process. There was nothing wrong with the packaging itself, (there was a lot of it), but the instructions on how to safely unpack and handle the battery were on top of the battery itself, meaning that all of the unpacking had already been done by the time you were advised how to do it. Daft.

Battery arrived quickly, was very well packaged, and fully charged ready for use. Fitted to old Land Rover Series 3 which then started immediately even in a cold damp morning.

Seems to be good vale for money. Came well packaged and is just as described. Feels solid and is within all tolerances for size and fits the vehicle cradle well. When fitted the change of power available for starting in comparison to my old battery was immeadiately noticeable and at the moment the battey appears to be performing well.

A good buying experience. Perfect fit for my 74 Stag.

A good price for exactly what I wanted

Seems a great product at a good price. I couldn't find a battery locally with this size of output. It turns the engine over well and is a good fit in the battery tray. Coming with a 4 year warranty, I am hopeful of a long life and good starting performance.

The battery from Tayna was an exact replacement for the one on my car and is excellent.The next day delivery service was very efficient with notification of delivery within the hour.

Delivered the day after ordering and was well packaged. Battery is much heavier than the one it’s replacing; a good sign of quality. Now it’s fitted it really cranks the starter well. Be aware though that as this battery doesn’t have any flanges on the bottom of the short edges, although it slots straight into a TVR Tamora, some modifications will be needed to secure it. A great battery and a good upgrade.

Easy to order - delivered on time and very well packaged.