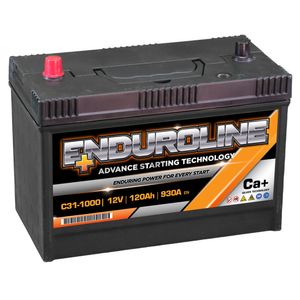 Super battery for my Vehicle, lots of spare capacity for winter demands.

Seems like a high quality battery with a 5 year warranty at a low price.

Had issues with another battery, due to damage in transit and time delay in replacing it. So Tanya up graded the spec at no extra cost for having been inconvenienced.Top marks for this, the battery is fitted to a LR Defender 300Tdi have to say it spins up effortlessly. If it last as long as the previous battery i will be well happy, only time will tell? Tanya service spot on as always, Battery is impressive so just have to see if it lasts now?

Just put it in the disco 2 and it started better than ever before! The original battery was 110 amp and this replacement is 120amp so hopefully will last a good few years. Excellent fast delivery too !

Excellent service, and a great battery. Thanks a lot.

Fits exactly in the discovery 2 battery box and came fully charged. To my surprise: ordered in Scotland and delivered the next day in Holland!

Started first time after fitting. No oroblems so far

Fantastic service, ordered at noon on Friday, received 10am Saturday.Very well packed and great product, will always buy from here in future

Excellent service and delivery, even in the snow! The battery is precisely the correct size for the compartment and my loader starts first time every time now.

The battery was delivered promptly and was well packed. Fiited perfectly into my TD5 which now starts effortlessly . Great product and company.

Delivered on time. Well packed. Easy to install especially with the built in handle on the top. Central connections caused no issue as existing battery was the same. It's been faultless since installation but then it is the correct rating for the vehicle... unlike what I replaced which it now appears was causing a few issues like the SRS warning light being lit.

As before an excellent service from Tayna. Battery arrived as planned. Installed in about 15 minutes. Car started on first turnover.

Fitted straight out of the box. Discovery 2 finds new life.

The Battery was the correct size and was delivered very quickly. The only problem I had was with the position of the Terminals. Because I ordered over the telephone and didn't actually see a picture of the battery. The terminals were located in the middle of the top of the battery when ideally they needed to be at the back. However, I just managed to stretch the + & - leads sufficiently to fit them over the battery terminals. So therefore, if ordering by phone ensure of the correct terminal layout.

Good service,on time. I will recommend this company