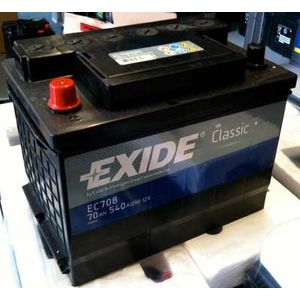 I bought a similar Exide battery (069SE) from Tayna in 2008, and it lasted for six years. (The warrantee was for three years.) This time I bought the nearest equivalent, and it was even slightly cheaper! The old battery is now in semi-retirement powering an electric fence. One thing I would point out is that the battery isn't a sealed design, so it will need topping up with de-ionised water every so often.

What a fantastic service, I ordered on Thursday morning and it arrived Friday morning the perfect fit for my MGB roadster, even better than the original as the carry handle helped to situate the battery more easily. I would not hesitate to recommend.

the correct battery for the car

Battery profile as per original MG specification. I.e. terminal posts are within the overall footprint of case and do not stand proud like every other modern 069's seem to be produced (and which virtually every other retailer supplies - regardless of the image they depict). Proud terminal posts increase the overall height of the battery and place the positive terminal worrying close to the classis. Do yourself and the MGB fraternity a favour and purchase a 069RE Exide Excell Car Battery (EX69) to ensure this model of battery casing remains in production. Also if it helps this is exactly the same battery casing as the Halford's 069 of pre 2004.

Excellent battery and the correct physical size for a TVR Cerbera. Everywhere else advertised an 072 or 069 case style for the Cerbera but the overall height was too big to fit under the wing of the car. If you need a battery for your Cerbera then buy this one, delivery fast and packaging excellent.

Excellent service, battery was as described AND recommended and delivery was immediate. Considering the price of the battery I have to say I was very impressed with the service. After the hassle I had been through buying 2 other batteries "claimed" to be correct but being incorrect Tayna Batteries identified the issue straight away.

EXCELLENT SERVICE FROM ORDER TO DELIVERY THANK YOU.

Very pleased with your service

The battery in my Disco suffered from a shorted cell after five years. This Exide replacement battery was delivered by Tayna within 24 hours, and was quick and easy to install. It has been working well for several weeks now. Recommended.

Very Good It did what I wanted it to do