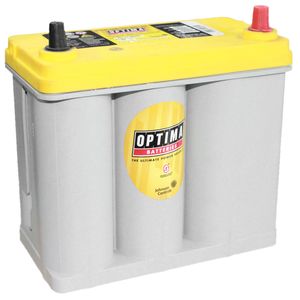 Fits IS300H 2015 as correct size and has the smaller Japan terminal posts (the Yuasa one has standard terminal posts which are too large). This is an AGM battery and is suitable for batteries located in the boot as it has gel rather than liquid acid so can’t spill in an accident. Quick service and responses. This battery also came with a handle.

After discussion via phone and email over the correct type of battery to fit my car, the delivery was very swift and well organised. battery fitted a treat and works fine. Great service.

Works great on my r33 gtr

R33 Skyline. Slightly bigger than standard size but fits in gap well. Loads of power from this battery and I probably should have done this years ago!

Hi battery dimensions are good , only issue was I never double checked the terminal orientation had to turn the battery 180 degrees to suit the cables

Battery was ordered and sent out in good time. However after fitting it to the vehicle it did not seem to be working properly. After getting it checked it seemed the battery was indeed faulty. On reporting this to the company they said to return it and if this was the case they would either replace it or offer a refund As it turned out they confirmed the battery was indeed faulty and when requested they promptly sent me out a refund. Seems like a good company to deal with and maybe i was just unlucky as they said this was highly unusual for this product.

I was sourcing an exact replacement for an old battery that had reached the end of its useful life. Searching online I found that your company could provide the product at a keener price than any competitor in Britain. Your phone line answered a query for me on a Saturday morning; I placed the order later that day and it arrived as promised on the Tuesday. The battery is installed and performing perfectly. Thank you, it's been an excellent experience trading with Tayna - I'd recommend you without hesitation.

Needed a specialised battery for my car. Very specific. They gave me the correct one as advertised and shipping was extremely quick. The package protection was the best I've seen for any product.

Quite impressed with this battery ???? as I have a very power demanding stereo system this battery does the job so far so good I would definitely recommend this battery to anyone

Very good every time i need one i buy one off this and from this site also tayna is very easy to deal with and their products are the best. From channel islands thank you

Ideal battery for Nissan GTR which has occasional-only use. Well packed and quickly delivered by Tayna.

Excellent battery and delivered as promised.

Excellent battery that fits straight into the R33 skyline

Bought this battery for a Skyline R33 GTR, fits perfectly without any need for modification, starts and holds charge much better than before! Very impressed with service, well packaged and quick delivery! Would definitely recommend! Thanks

Excellent Service. Quick Delivery, Excellent Product. Would recommend Tayna Batteries to anyone looking for a new Battery. Don't be shy give them a try, you will not be disappointed.

Great service. Great battery. My 350GT now runs like a dream! Thanks