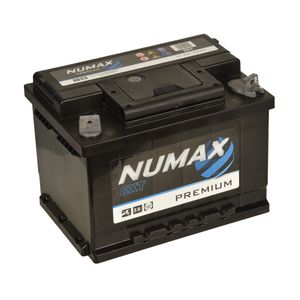 Well packed and now in my Jowett Bradford classic car which started first time (after charging for about an hour). Unfortunately delivery was poor, left on a neighbours doorstep, supposedly signed for! with no message left for me, (and I was in all day).

The battery arrived promptly by courier and was well packaged. I removed the travel plugs and put the battery on charge overnight prior to fitting the following day. The dimensions were identical to the previous one and it was easily fitted. The new bolts were an added bonus. The battery's early performance has been faultless and I look forward to seeing how it copes with the winter season

I discovered Tayna some years ago when I was searching for a battery with square posts. At that time I bought a Numax 097 and in 34 years of owning my car it has proved to be one of the longest-lasting batteries ever fitted. So I have gone for the same again and hopefully this one will prove equally successful. Tayna’s service is absolutely top class in every respect. They make the whole process of choosing and buying a battery so easy. I would recommend them most highly and will certainly be back if and when I need another battery.

Excellent Service, battery was well packaged and arrived earlier than expected, having been told it was out of stock and delay of 7 days.

Battery seems fine but does not fit the escort Cosworth battery clamp so had to make a new one up.

Started to misbehave at under 12 months old. Completely flat in less than a week with very low quiescent drain from the car's electronics. I now have to keep it on float charge. Haven't made a warranty claim because of the issues of sending it back for inspection, only for them to claim abuse.

Had a dying battery in my motor since I bought it and now with the Numax I've never had the car start so easily! Even ont he few cold mornings I had to get going, it did the job.

I can't review the actual battery performance because I only fitted the battery a couple of weeks ago & I've only used the car once, which was the day after fitting.... I can review the service, delivery time, packaging etc though which was all faultless.

Excellent. Fitted to my Escort cosworth .

Very helpful after being mucked about by UK Mail delivery service, But Tayna sent a new battery with Yodel that arrived the following morning, So very satisfied with Tayna Batteries but not with UK Mail.

1st class service. Battery received next day. I had concerns on how this would arrive, my mind was put at rest on receipt, these guys really know how to protect a battery in transit!!! Definitely will be buying from Tanya in the future.