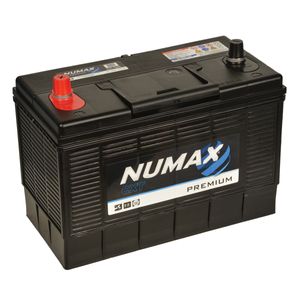 Fitted straight in with no mods required. Started right up. Would have liked it sooner but then I should have ordered it in the week and not lived in the Highlands!

Impressed with the service, delivered next day as promised. The battery seems great, but obviously it's early days to see whether it lasts. That's why I've only done 4 stars. Otherwise I would recommend to anyone.

Delivered next day. Fitted Discovery 2 properly. All my poor / non starting problems seem to be over

It does what it states on the label. Bags of power with massive cold cranking.

good informative website, giving information for straight replacement batteries and upgrades. Has solved my lack of power issue, although too new to rate for longevity etc.

Excellent service from ordering to delivery..less than 24 hrs.Price of battery was one reason to buy plus the after sales guarantee.The 120ah Numax battery was actually cheaper from Tayna than smaller batteries from other suppliers.Thanks to Dan who took order and displayed a professional & knowledgable approach to my requirements.This battery is now on LR TD5 and performing faultlessy. Many thanks for this professional service I will certainly recommend Tayna to others & use Tayna again when the need arises...Thanks again

I received helpful advice on the phone about which was the right battery for my vehicle. I then placed the order, the battery arrived the next day et voila....job done, thanks.

More than happy with the service and battery will use again without question.

Great supplier, well packed and very quick shipping. The upgrade suggested by Tanya fitted perfectly and has a considerably higher output for not a lot of extra cash.

Excellent service, arrived next day and fitted in perfectly.

Ordered this to replace LR original in my Discovery TD5. Physical size spot on and a direct replacement. It a bit higher rated than the original so will hopefully be good when it does get cold. Time will tell how it perform so may review in a year or so. Only issue was slight acid leak from the breathers (think this was down to the delivery guy). Advice give straight away on how to clean, perhaps a sheet should be included with each delivery. Very quick delivery

My old battery having expired, I quickly learned that replacement batteries for my Discovery TD5 are hard to come by. Its a whopper,with terminals in the middle, not to one side. Local suppliers including Halfords unable to help.Web research got me to Tayna.New battery has even more welly!

Very pleased with battery, really well packaged. Less impressed with delivery - failed / delayed on two occasions. Tayna staff really helpful but ultimately it was out of their hands. Completely satisfied with numax battery and tayna , and would purchase again. ( might try and collect though!)

This is the 4th battery I've had by Tayna, there all going strong, the selection by size is great so you can select an appropriate battery for ancient vehicles.