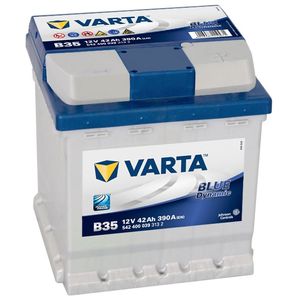 Excellent product and price, Tanya should however consider the courier service they are using. They could not find my house and would not answer the phone to me, in the end I went to the depot myself and did their job for them.

Did just what it said on the box

I can hardly believe how great this service was. I ordered the battery at 15.10 on Tuesday afternoon and it arrived at 10.30 on Wednesday morning. And it fits into an MGA battery box very nicely. I will probably not buy a battery from anyone else, ever again! Thanks Tayna.

After seeing the price of renewing the two 6volt batteries on the MG I finally decided to bite the bullet and swap to a 12v battery. Battery arrived by 09:00 next morning and left with my neighbour with card through door letting me know although easy tracked on line. Excellent service all round and battery turns engine much quicker than with the 6v batteries.

Delivery on time brilliant. Battery fitted my 65 MGB Roadster as I hoped getting rid of the two 6volts. No problem fitting just hands to big for small spaces.All together the answer to an MGB owners starting worries. BRILLIANT.

Perfect alternative to 2 6v batteries for my MGB. Only one battery required.

Great service - delivered next day!Fits with minimal fuss using one of the existing brackets.

Seem like a good powerful battery but carrying and handling it into position in an MGB is difficult due to the lack of a carrying handle. Come on Varta put a handle on your batteries please!

Great service and delivery. This battery fits perfectly into one of the 6volt bins on the early MGBs. Very easy conversion from two 6volts - just had to move the earth lead across. The securing bolts and plates from the old batteries also work on this battery by doubling them up and adding a spacer. Perfect job and got the car fired up for the first time in several years!

hasn't been on car long enough, but turned starter better than previous 2x6v

I received a prompt and helpful telephone response and the battery arrived on time.

Battery fitted perfectly into the battery box of an MGB. Minimum wiring required to convert from 2 x 6V batteries to 2 x 12V

Battery was ordered online Tuesday night May 14 and arrived 9.20am on the Thursday morning full charged and ready to go. The service was faultless and an example for other to try and beat.

This was delivered in record time, and was very well packed. Customer services spot on. I feel there is no way they could have improved on their customer service and dispatch team. This battery was used to replace the two 6 volt batteries in a classic 1976 MGB 1800 and was a perfect fit into the driver's side battery box without any alteration or adjustment problems at all. I just had to bring the existing negative lead over from the off-side and bolt it just behind the negative side of the new 12 volt battery, taking care that it was a sound earth connection. Started first time and works perfectly. Job done! Thank you. Ted Bentley

I used this battery as a replacement for the two 6 volt batteries in my MGB. I had read good reports and they certainly turned out to be true. It was a very easy conversion, only requiring the repositioning of an earth strap so that it reached the terminal. A brilliant solution at a quarter of the price of the 12v conversion offered by the MG Owners' Club.