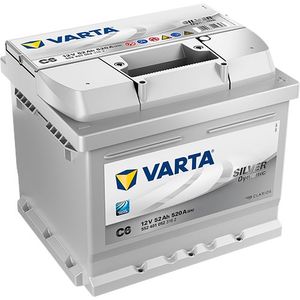 I can only review the service which was very good. As for the battery only time will tell but going by the guarantee Varta have every confidence in it.

Purchased the 076 varta silver for my diesel car which was struggling to start in cold weather, it cost a little more than ordinary batteries however, well worth it. I now have a first time start every time.

Everything was and is spot on, battery is a brut.... Spins engine over with great ease... Thanks

Prompt delivery and appears to be powerful and good value

Exactly as ordered and delivered noon next day. Given that the old battery wouldn't take a charge, delivery was necessary so it's good that it's this easy.

Arrived well packaged and is an excellent battery. Emergency purchase so used 1 day delivery so can't say if it would have been delivered overnight.

I bought this battery when starting the engine, even in good weather, became laboured. I chose a high performance model to cope with short winter journeys using headlights, the rear screen heater, the fan on full speed, etc. The order process was simple, the price was good, delivery was speedy, packaging was secure, and the delivered product was as described. Fitting was straight forward, and the handle made positioning the battery a little easier that it would otherwise have been. Only time will tell whether this battery lasts as long as its predecessor, but starting is no longer laboured.

I ordered the battery about 3pm and it was delivered the next morning! Brand new item in original, sealed packaging, well packed and speedy delivery at the best price I could find! Absolutely Great Service and I will definately use you again and recommend you to friends & colleagues!

Very quick shipping and very well packaged by Tayna, thank you. The battery itself fits ok into the Elise S1, but is naturally very tight for space. Would recommend the adjusable battery bracket from Eliseparts to replace the standard bracket to ensure the battery is firmly fixed.

Difficult to appraise the battery at such short time of fitting it , but so far all seems to be well, it fitted great with a handle for lifting, looks good in place too.

Ordered the battery at 2pm and it was delivered the next day. Pretty impressive as we live in the Highlands near Aviemore

Hi Tayna team. Thanks I,m wery satisfied with your service. The website is wery easy and useful. Quick delivery. Many thanks. Csongor

This battery transformed starting of the car in the cold weather and helped with stereo not dimming headlights.

Very good sorted the problem on my car out as I had a sub and amp but now it's fine and I got it the next day.