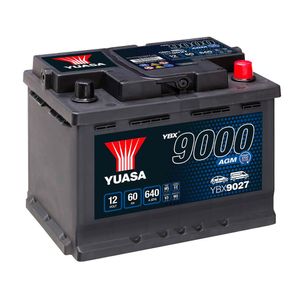 The battery was purchased to replace the original battery which had totally failed, it arrived on time and fitted to the car perfectly. The previous stop/start problems have also been eliminated. Another great product and delivery service from Tayna!

Bought this as I do lots of short journeys, although the car isn’t stop start, I wanted a battery that would cope better than the standard battery, which was struggling a little in the cold. So far it’s been perfect, exact fit as the oem battery, and a better price than Halfords, even using my trade card, including next day delivery. Very pleased, but then Yausa are a premium brand so to be expected.

Was unsure about fitting an AGM battery as the vehicle had been fitted with an EFB battery but after contacting Tanya I was assured that it would be OK . The new battery has given the car a new lease of life with the stop/start working far more than it had ever had .

Very good quality battery better than others available in the 027 size.

They did what they said on the tin! Fast efficient service at a competitive price!

Ordered a Yuasa AGM Start Stop Car Battery YBX9027 on 10/07/20, 24 hours later the battery was delivered by Yodel who are very good round here giving a 2 hour delivery window and live tracking of delivery vehicle on a map. Checking the battery it was well packed but was only showing 12.2V on a multimeter so needed to be charged before fitting. Be very careful to check required battery spec as when I entered car registration number the car was identified correctly type 096 batteries were recommended incorrectly. The correct type was the 027 range of batteries so be sure your existing battery dimensions and terminal arrangement.

Good prices and top flight batteries.Next day delivery.I wanted a Yuasa battery as they have a five star reputation for longevity, so chose that instead of the recommended one which was slightly dearer.Including delivery the Yuasa came in 18 pounds more than a standard one from a competitor! Had the same one from Tayna on my previous ASX with no problems.This battery does something like 300,000 starts against 20,000 for a standard one and is unspillable.

One of the best AGM batteries for small cars with stop/start engines.

So far this battery seems excellent, stop/start works seamlessly and it has so much power the car starts the instant you turn the key, cannot fault it. Very impressed with Tayna's ordering/delivery service and the price was the lowest I could find so top marks.

It's battery and made power what more can I ask.

Very helpful people I spoke with - 4 stars only because problems with delivery agent - delayed 2 days - first because of van breakdown and second because I added delivery detail on day of delivery and they returned to depot - apparently standard practice but seems crazy especially as they make no mention of this on details sent etc!

A quality battery at a competitive price, delivered. What's not to like?

Arrived next day delivery. Customer service were very good whilst dealing with them in regard to which battery would be best. would recommend.