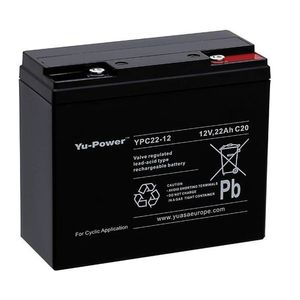 Battery as ordered, delivery good, doesn't get a lot better.

I sent an email to determine if I was ordering the correct battery (for a Robomow RL1000). I got a response the next days confirming what I needed. I placed the order the same day and it was processed and shipped the same day. It arrived on schedule without any hassle and batteries are working perfectly. The whole process was very professional and hassle free.

Bought 2 batteries on march 2013. One died after 2 months, the other died now only after 1 year. Only 5V left on the battery. Did I get a bad series of batteries? I don't know, but Tayna replaced the first one (after 2 months) without any hesitations so big thumbs up for Tayna. The other is now just above one year so probably no warranty. The batteries were used for a RL1000 robomow robot landmower. I ordered a new set hoping it was just a bad series.

Very professional, I got an acknowledgement of my order, and then a note to say the batteries were not in stock and offering an alternative. I decided to await restocking and the order arrived within a few days. Highly recommended!!

My robomow is working great again with these bad boys.

Delivery was super efficient and product is exactly what was ordered and seems to work very satisfactorily. Star rating really depends on how long it lasts!

Does the job and was delivered very quickly.

I needed replacement batteries for my Electric Moped and came to Tayna for advice. I got excellent advice and customer service and was recommended this battery. The price for the four batteries that I needed was over 40 euros better than anything that I could find in Ireland. On top of that the postage rate was very fair and the batteries arrived after two days. The batteries turned out to be exactly what I was looking for and I am delighted to have my electric moped back on the road. So overall a five star rating is the least I can give Tayna. Simon

5 stars for customer service on the phone and for delivery, but I haven't used the battery yet. It will accompany me to South Africa to-morrow.

ORDERED ITEM WAS OUT OF STOCK SO WAS SENT ALTERNATE WITH HIGHER AH RATING. HELPFULL PHONE CONTACT AND AS IT HAPPENS REPLACEMENT WORKED JUST FINE

Good service, but would not have received the lower price if I hadn't used the online chat, and ordered off the web page.

This is the second battery of this type I have purchased. The first was purchased in a May 2012 and was used on my golf cart at least once per week, occasionally twice a week. In oct 2013 the battery failed to survive even 14 holes and thus needed replacement. I\'m not sure that 18 months is a Reasonable life expectancy for a battery and hope the replacement lasts longer.

Second battery from Tayna. First was faulty (not this brand) and replaced. Had this make, Yuasa, before and very happy with the quality. Well done Tayna. Excellent service, great communication and very rapid delivery.

Easy. No issue. Delivered ahead of schedule. What more could you want!

I ordered a LUCAS battery. I got a Yuasa. As I'd had it shipped to Portugal I had to accept the wrong item. Now, a year later it is struggling to get round 18 holes. I'd like to think that the battery I'd ordered would still be racing up the hill on the 18th ! I guess I'm just lumbered with an inferior item that was supplied in error.

Higher capacity replacements for a mobility scooter. Easy to use website, excellent price and delivered promptly and at a very reasonable cost despite the weight.

I came to tayna as another supplier after accepting my order discovered they had none in stock after all. there was not much difference in cost. This battery allows me to complete 18 holes comfortably without pushing the trolley. Hopefully it lasts long enough to justify 4 star rating.

arrived on time,no problems so far,just like it says in the adverts