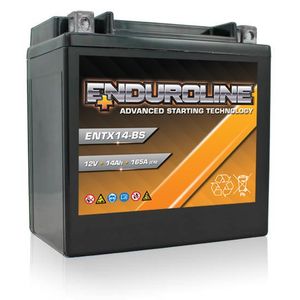 Ordered battery on a tuesday,it arrived on wednesday.just dropped it into my bike fired it up no problem. Been using my bike most days and still fine.

Purchased this battery due to its specification. However it could not be fitted to the 1997 Honda ST1100 as the battery posts are not tall enough so the standard Honda. battery cable fittings will not line up with the holes in the battery posts. I think this may happen with some other bikes. All the makers need to do is to increase the height of the posts. Great pity as it seems to be a good battery. Tayna were great and exchanged it with no fuss. A Varta fitted perfectly.

Arrived promptly and as described. Excellent.

Battery arrived within 48hrs, which, considering I ordered it over a weekend, I thought was excellent. Fully filled, charged and sealed, it was a straight drop-in replacement. Fired the bike up next morning without a qualm, and every morning since - even with the headlight accidentally left on on a couple of occasions! Only time will tell what its long-term reliability is, but considering that it's cheaper by far than similar sized, lower performance equivalents from other manufacturers, I'm well satisfied so far!

Felt heavier than the battery I took out so i presume larger lead plates inside. fits like for like bike fired up straight away after standing over winter outside, Very happy

Works perfectly-what more can I say.Go and get one!!!!

A good powerful battery and comes fully charged and ready to go. However the terminals although in the correct place are not a direct replacement for the HD original due to the terminal posts being smaller which doesn't allow the stock leads to fit correctly. I needed to reroute my leads and fit them to the tops of the terminal posts instead of the sides as original, this means that there is exposed terminals as the original terminal insulation boots no longer cover.

Battery was delivered on time

Works great in my Velocette electric start conversion and looks similar to the original battery.(Just a bit wider).

All good so far

I looked for a battery with higher performance for my v-twin motorcycle, but this battery wouldn't start it, despite prolonged charging. I swopped to a Varta which was fine. Tayna refunded this battery straight away.