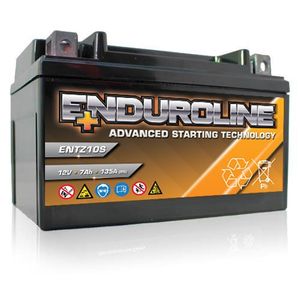 It all looked good till I tried to fit the battery due to the resin at the base of the battery posts I had to cut down the bikes terminals to make them fit, this battery was supposed to be high power and listed as higher amps than std but the bike actually sounds lazy when starting like the battery is a bit flat but it's started the same after a few runs, time will tell if it lasts the warranty period .

Battery fitted and appears powerful and good quality. Minimal information shown on battery or included in shipment but well packed.

Brilliant service.Ordered battery late one night. Next morning there was an email to say it had been dispatched. The next day it arrived. Bike started first time with new battery. What's not to like?

Perfect fit. Had to move connections to top of terminals instead of front as my connectors were about 2 mm to big to fit without fouling on battery body, apart from that the beast came alive at first turnover of engine so v happy.

The terminals are shorter than on the battery it replaces necessitating a lot of work with a file in order to get the bike's leads to fit. For this reason the old terminal nuts and bolts wouldn't fit and the new ones provided were all odd sizes which didn't fit each other let alone the battery. A search through the toolbox eventually turned up some old nuts

Seems fine, great service, battery arrived in Shetland 4 days after ordering, which is pretty good for here! Battery seems fine, well see how long it lasts (they have a habit of dying in.my garage)