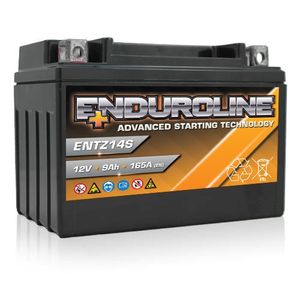 Battery works well, connections were a little fiddly (bolt and small nut rather than a bolt into pre-threaded terminal).

Perfect job, speedy delivery and half the price of Halfords

does as it says , though i have got to run it for a length of time, time will tell

Good battery at a good price and very quick delivery

The battery arrived very promptly and when connected bike started first turn. Access on my bike into the battery compartment is "horizontal" and limited. Connecting up stood in one's own light is always awkward with very little movement availble from the leads.. The 2 rectangular connection nuts supplied are probably the worst I have found and with the skimpy length set screws they easily dropped out of the battery posts. When I substituted the old Exide pairs from previous battery it proved far easier.. Theirs may only be a milimetre ot two wider and longer but improved the job no end and In a roadside situation they would be even better. Otherwise there is little to complain about!

Not sure about this fitted to a BMW 1200 GS it doesn't seem any better than the one it replaced & at the annual service the report said the battery was weak.

The only label on the battery is the one stating brand. No othe marking or discription. No safety markings no nothing. Basically you don't know what you get at all.

Received the YTZ14S Enduroline battery as stated the next day.It was well packed and delevered by Yeodel. It was fully charged, fitted it to the bike and it started straight away. Thank you Tayna batteries for your good service.

First class product, fitted to my ST1300 Honda Pan European started first touch of the starter ???????? and delivery was super fast too .... thank you

A very good battery for the price,wouldnt hesitate recommending this battery.

Worked out of the box (pre-charged).Does what it says on the tin! Have yet to have it for long enough to give longevity rating.

The service was excellent, The Joe Lewis certainly knew his trade. I explained what motorbike the battery was coming off and advised me on the battery that i purchased. My bike had poor starting (flat battery) if not ridden for two days or more. Delivered on the date advised. From the box to the bike, no hassle. I feel confident that i could leave the bike for a week or two and she'll start first time after my purchase. Thanks for a great service and battery. Cheers Phil, Scotland........................

Battery working fine, too early to comment on it`s longevity.No maintainence instructions or guarantee in box .

Super fast delivery....great service. I have tried other suppliers and makes but keep coming back here!