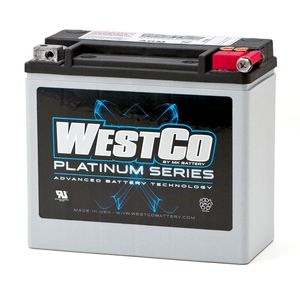 Does what it says on the box. Starts bike with no problem. Obviously no long term judgement yet but seems well made.

didn't fit either, exchanged next dad without problem.

Delivery was spot on next day even though it was a Saturday. Battery fitted a treat. Now just to see if it lasts 7 years like the last one on my Harley. Might just point out I had to check I had selected the correct one with the office before purchase and they were very helpful.

Excellent product arrived within 20 hours of ordering, can't be bad!!!!!

brilliant battery just the job for a high cube v,twin

Bought a WestCo for my 98 Trident 900 a couple of years ago. Had it on the charger last week,it's still charging and holding at 12.8 volts or 100% if you prefer.Needing a new battery for the Harley it was no contest.

Pretty good all in all. This purchase was for a replacement for an neglected battery but the branding and packaging had changed. A quick call to a helpful member of the team settled the correct choice. Delivery was prompt and the bike started first time from an obviously well charged battery. Not sure what more one can hope for or expect?

A1 service and products

Arrived next day, fitted perfectly, started bike without any charging

After a good look around decided on this HD replacement battery. Significantly cheaper than the one from HD and so far very pleased with purchase. It's a great fit and battery terminals with the included brass spacers are just where they need to be.

Came within a few days of ordering and was fully charged but put it on a trickle charge as was not putting straight on my bike but for the three days it was connected the charger never started up once. Thank you great product bike fired up first crank with this battery on.