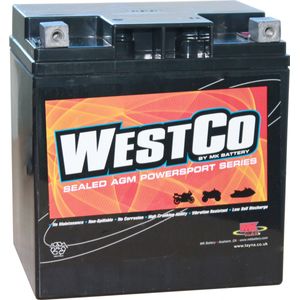 Ordered online came the next day, fitted straight in. Very pleased as it was half price of genuine H-D battery. I will use Tayna again.

Fast delivery, fitted into bike like a glove but able to remove easily through hand holds built into battery casing. Bike works perfect with new battery fitted. Battery looks like quality and would use again.

This battery was for my Harley Davidson Road King and is of an unusual, hard to obtain, size. I ordered it one day at 1pm and it was delivered at 8.45 the next morning! It slotted straight into the mounting cradle and the bike was up and running within 5 minutes of delivery. These batteries re always expensive but this Westco from Tanya Batteries was the cheapest available by far. I dont often fill in reviews on items but I have made an exception because the service from Tanya was exceptional

only had one for 18 months and could not charge up after winter period.

I needed a Battery late Friday afternoon ready to take my daughter to her Prom on my Harley. I was worried sick of letting her down after all the planning she had done. I found Tayna online and after one phone call I had ordered my battery and was pretty much guaranteed a Saturday delivery. 8.15 the next morning my battery arrived. The Tayna battery was in my option better than the Harley battery as it has a carry handle which made fitting even easier. She started straight away and I delivered my daughter down the isle to her prom. Massive thank you for all you help

Battery arrived on the day promised, my only worry was the packaging. Even though when opened all was well, the box was very battered and i did have a concern that the battery may have been damaged. Thanks for the fast service, it meant we didn't miss our weekend way.

It started the engine first time straight out of the box with ease. A bike with full electronics like this needs a powerful battery to make it work right.

Excellent service and product, far cheaper than from Harley.

Obviously, what you really want to know with a battery is 'how long will it last'. I don't know yet. But this is a recommended product, and has brought real enthusiasm to my Harleys starter motor. It arrived quickly and very well packaged. I have great expectations.

Haven't used the battery yet but the service was unbeatable.

Battery good match for the old unit , although the new battery has terminal screws facing outwards whereas the original has them at the top, but this is just fiddly and easily overcome. Other than that small niggle it fits well and has ample power to turn the engine. Price cannot be beaten by HD. It is also much easier to remove due to the way it has been made.

The battery is arrived 05-11-2011, all ok thank you sinserely Carmine Campanella

Battery fitted size wise ok had to reroot some of the cabling due to terminal changes took 10 mins not a problem.