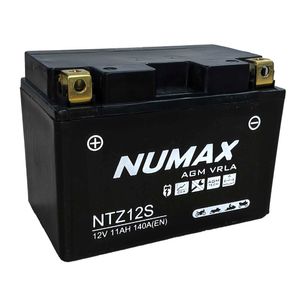 Ordered promised delivery in 2/3days. Came following day! Can't beat that. Precharged ready to roll. Have used them before same script. Thanks.

Replacement for original on Honda SH300i. Fitted perfectly and worked immediately without charging

This is the second battery for motorcycles that I have purchased from Tayna. I would not shop elsewhere because their products, prices and service are second to none.

does the job - see how it goes in the long term. Great company to deal with

A great priced battery that arrived in good time and I was also pleased that it was fully charged.

No problem with battery but hugely disappointed with Yodel "next day" delivery service (which was main reason I ordered from Tayna!). Yodel picked up battery on Monday but not delivered until Friday. No explanation from Yodel, only delivered after escalating to Tayna.

Supplied NTZ12S but is ready filled and sealed and fits OK

No complaints with product ...however courier service used to deliver battery were dreadful!!

Quality battery at a great price

I bought this battery because it had the higher Ah capacity rating, the battery arrived quickly and fitted perfectly, but on cold mornings my bike still seemed to have problems starting. After a bit of digging I found that the Cold Cranking Amps of this battery is only 140 amps, considerably lower than the 200+ of most batteries in this size. Although the battery would probably be great for a smaller bike it seems to be a little lacking for a VFR800.

Battery was almost flat when it was received. Didn't even have enough power to turn the engine over the first time it was fitted. Has not been holding charge either. I suspect this is due to being sent old stock rather than a problem with Numax batteries in general.