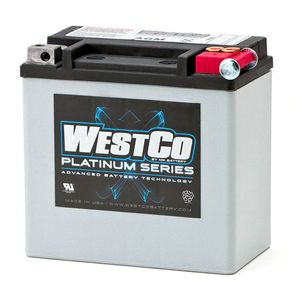 Exactly what I needed, very good

Much better than cheap batteries (e.g. Motobatt). Higher cranking amps on this WestCo mean my Harley starts much more easily. The terminals are stronger and positioned for screwdriver access so attaching leads is much easier. An optional 2-year guarantee means that, even at twice the price of the cheapest alternative, it's worth it. Also, Tanya delivered in less than 24 hours: makes the postage a bargain! Excellent service, and product. :-)

Very pleased that I bought this as the terminals match the OEM so the leads and caps fitted as they should unlike the old battery that came with the bike. An extra 10% CCA can't hurt either. Bike fires up straight away so all good. Next day delivery in a well wrapped package, what's not to like?

Excellent replacement battery for a 2008 Sportster 1200. I made a mistake ordering the recommended Yuasa battery with the terminals the wrong way round but Tayna were great, swapped it out and we're good to go.

Great service, the battery I originally wanted was out of stock and even advised an appropriate alternative which is so far great for my harley sportster. Starts first time.

This is the first time I've tried this battery on my Harley and I was very happy to find it was very easy to fit and the two top and side screw connecting points on each the + & - terminals made it a lot easier for me to connect the cables from the bike and the needed cables for the extras I have fitted to my bike, like the new alarm I just fitted and the Oxford battery charger + & - connecting plug. I put the battery on charge first before fitting it to the bike and it only took a 10-minute charge to show green on the charger. A1 Battery a must. Happy biking Stewart

Excellant service. Product arrived as promised and was well packaged to protect against damage in transit.

This battery was recommended to me by a Harley parts specialist, and i am not disappointed. Great cranking power for my XR1200 and reasonably priced too. A very good replacement for the original factory fitted battery that was replaced

Not the first time Ive fitted one of these batteries to one of my bikes...always first class performance

the battery was exactly as described, was easy to find the the right one for my bike from the list , the delivery was super fast . ment i was up and running the next day

Good bit of kit, excellent delivery, had to put slightly longer bolt to make it fit

Battery appears to have the same capacity and performance as my original Harley one - time will tell if it lasts three years. However,unlike the original, the front terminal faces are not level with the front of the battery. If they were it would eliminate the brass spacer washers and the bolt would have more threads to screw into - I was very nervous of stripping the lead threads when tightening. This battery is used on my Buell 1125R which you don't list!

Battery appears to be of good quality, however, have given it four stars as at time of ordering, I believed the Cold Cranking Amps (CCA) to be 250, as stated in listing, however, info on Battery states this to be 220, battery works fine, though the stated 250 cca was a selling point for me, as I wanted as much cold starting power to turn over a big lump of a Harley as I could get....