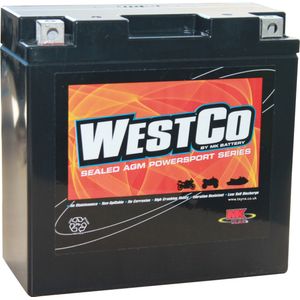 Good value product and came charged and ready to use bonus

I've never had a Westco battery but this one is excellent. The engine turns over and starts instantly. My XJR 1300 is now put away until the Spring except on Christmas Day when I start her up and run her on the centre-stand for half an hour. I am confident she will start first time as well. Tayna service is excellent too. I ordered the battery on a Friday morning just before 1000 and it arrived the following morning at just after 1200. Great work by Tayna and Yodel. st time then as well.

Fixed the starting problem by fitting a new battery

I've bought batteries from Tayna before, and I will recommend them to anyone. The delivery is always super fast, and their prices take some beating

I ordered at 1600 on a Friday ,battery delivered at 0730 the next morning".....you want faster than that? Invent a time machine. Excellent well done tayna

Third time I have ordered from Tayna - very fast delivery and very competitive pricing - will definitely use them in the future.

Battery fitted about three weeks ago, so far no problems, My original battery wouldn't start the bike if left more than a couple days. NO such problems with the new battery. have left the bike for over a week and fired up first time.