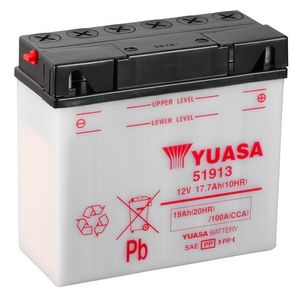 Email received initially advising battery would not be dispatched until Monday of the following week after ordering then on that day while miles away from home I received a text from the courier advising it was being delivered so had to reschedule. Battery delivered in arranged day and instruction leaflet explained how to remove plug however the plastic round part supposed to be used to remove the plug was in a completely different part of the packaging from the plug, this then meant we had to remove the packaging to get into the plug and had to try and remove the plug in a safe way which was not easy at all. Acid leaked onto floor etc

Delivered promptly and well packaged. Had to adjust acid levels after transportation but all fine afte charging.

Great to get a like for like battery for an old motorcycle and very fast delivery. I was concerned that two of the cells had not been pre-filled to the level though and had to obtain more acid. This was easier than returning it.

Can't complain about the service, thank you.