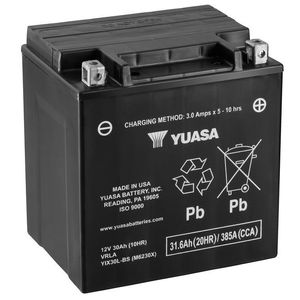 Bought this to replace a smaller battery that was fitted as standard but not up to the job. Performed well for around a year and then just didn't hold its charge. Unfortunate as earlier Yuasa batteries have been faultless but this is my third recent one and they have all failed within three years and we know how to look after our things. Not what they used to be. A pity as they were one of the best.

7 month old Westco battery failed on my Road King. Recharged it and tested bike: all okay. Phoned Tayna and was patronised somewhat, despite assuring rep of many years of professional experience. Advised that the testing process could entail a wait of nearly two weeks. In the event, a more customer friendly representatives, Simon Taylor, rang in just a couple of days to advise that they had tested the battery and found it faulty. I have upgraded to a Yuasa and anticipate trouble free biking for the next five years... Battery arrived first thing the following morning.

site said unit in stock but had to wait over a week for delivery......had choice to go to other site had I known delivery would not have been straight away. Adrian