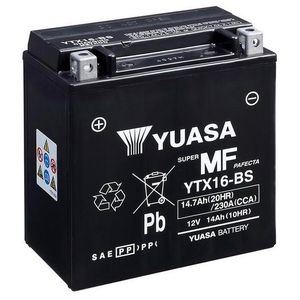 Having initially been unable to order a different make of battery and one which was slightly cheaper I replaced with the Yuasa YTX16-BS which was the original battery on my quad some years previously. Battery arrived charged and quad started first time after several months of sitting idle.

I have tried cheaper batteries but they do not last as well as the Yuasa which seems to be the best standard battery available.

First class service in every respect.

This was a replacement for dead battery (another brand). Arrived quickly, fitted easily and working hard now!

Really good service from Tanya and in particular Chris. Many thanks!

OE fitment on my Tiger800XC. So, as Tayna didn't list a Varta battery, I bought this to replace its six year old one that was failing.

Straight swap for the one in the bike. Good quality of service.

This battery is identical to the last one I had in the bike, which only just started to show signs of losing full power. The last one has been in the bike for at least five years, so I reckon that's not bad. I'm using the old one to start the ride on mower now and it's fine for that. I wasn't sure the Exide battery would fit, as the width is 3mm more than the other brands. That doesn't sound much, but I don't think it would have fitted in the battery compartment. I can't fault Tayna, great and speedy service. They will be my first port of call for batteries from now on.