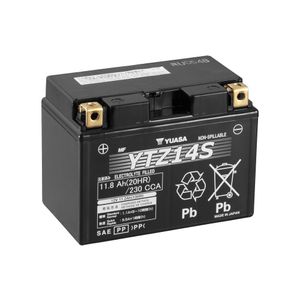 Battery delivered quickly and safely packed. The information on the website was spot on and I was able to easily identify if it will fit my bike. The battery came slightly undercharged so you do need to have a trickle charger at hand before you can start using it, especially in the colder days. After I left it for 8h on the charger overnight it was ready to go in the morning!

Quick, helpful and efficient service was provided by Tayna. And the price was good too

Does what it says on the tin!

Good service & good battery, what more do you need.

Nice batt, does the job.

Great battery, this replaced an identical model that has been excellent. Last one lasted 50k miles with no issues

I believe Yuasa batteries to be the best and always fit them to my motorcycles. This arrived very quickly and after an overnight charge fitted it and went for test ride. Battery appears fine as usual. Thank you for your excellent and speedy service, I will definitely recommend you in the future. Best regards Colin

Best price for this battery. Received in Belgium within 48 hours of order. Perfect

Inspite of my battery not being in stock, I received a call today they would send battery direct from Belgium but it would take a couple more days to arrive. It arrived when they said. Fitted that day. Job done. Happy customer.

Recommended battery for bike and original has lasted 8 years so can't complain.

Having received the battery I fitted it to my motorcycle and connected my Optimate charger. The charger identified the battery as having sulphated plates and went in to its deep discharged battery recovery routine in an attempt to recover what it saw as a deeply discharged, badly sulphated battery. I then removed the battery from my bike. I connected a battery from my other motorbike to the Optimate to check it for correct operation and it functioned o.k. I then connected the new battery to the Optimate charger where it again indicated that it was deeply discharged despite having a high terminal voltage prior to connecting the charger. I advised Tayna who state that the battery should be o.k. The battery has been left on the Optimate for about three weeks now and I fitted it again to my bike today. It was able to start the bike but on putting the bike away in the garage and connecting up the charger the charger has again gone in to a recovery mode for a deeply discharged battery. I have doubts about the capacity and service life of this battery.

Good all round service

Excelent service. I ordered late on a Friday afternoon due to my battery failing. New battery arrived before 13.00hr as promised. Happy days.