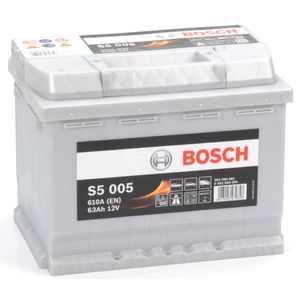 This battery was the perfect size to replace the original factory-fitted battery in my Mitsubishi Colt 1.5 CZT, but had the added advantage of about 33% more amp hours and a superior CCA. Although the original (unbranded) battery had lasted almost 11 years, I had never had to recharge it and it rarely required topping up with distilled water. For the replacement, however, I decided to purchase a sealed battery, and one which was more powerful. I chose the Bosch battery because of the brand's reputation for reliability, and have always had Bosch spark splugs fitted to my car. Also, I decided that it was worth paying the extra for the S5 type with its 5 year warranty. Tayna's price was extremely competitive, and the battery was delivered just after 9.00am on the day after I had placed my order online. By fitting the battery myself I saved about £70 off the price I would have paid to have the same battery supplied and fitted by the RAC (members' price) or a local supplier. I am extremely pleased with this battery. The engine starts perfectly, even on the coldest days, the instrumentation is brighter and easier to read than before when illuminated, and, although this is possibly my imagination, my car seems to run even smoother than before. So it is a maximum rating for both this battery and for Tayna Batteries!!!

Placed order and received it promptly without any problems.very good service Thank you.

I would recommend Tayna to anyone,the price and delivery was excellent.

Delivered well packed but a day late through no fault of Tayna. I buy all my batteries from Tayna because they are reliable. This Bosch S5 is excellent

The really strong point about this particular battery, apart from being a respected make, was the ease with which, I was able to fit it, myself. It fitted the Battery Tray, exactly; the bottom mounting bracket located exactly in the battery bottom shoulder, the cable terminals lined up exactly, as regards height and location, with the new battery terminals. In all respects, it was an exact replacement, of the original OEM Varta.

great price great service would defo recommend many thanks

Bought to replace OEM battery fitted to Vauxhall Ampera. Because this lives under the floor of the boot, i.e. inside the passenger compartment, it must be sealed to prevent any possible leakage if tipped upside-down in an accident. Very few replacement batteries meet this standard, but this one does. Fitted perfectly, and the price was good. Delivery the next day was also super fast.

Battery arrived quickly and packaged well. It was fully charged and fitted perfectly.

Carefully packed and delivered next day. It was slightly higher spec than original battery(which is no problem) but the same shape and fitted in my vw golf 6 GTD fine. She now starts like a dream! Thanks

Perfect replacement fit for my Peugeot 206. I only drive it at the weekends as I have a company van. Recently my original battery was needing a boost on the Friday night otherwise it wouldn't start at the weekend. Now with this new Bosch battery with its much greater capacity (63Ah) over the 40Ah that was originally installed. Cranks and starts instantly. Good delivery times and low delivery price despite the weight!

I was looking for a like-for-like replacement battery replacement. Found it at Tayna at an excellent price. Ordered at 15.45 (weekday) and it was delivered the following morning. Perfect transaction.

I ordered this Bosch S5 battery (563 400 061/0 092 S50 050) as it's identical to the one that I'd previously fitted in my Saab. After installing this new battery the engine started without any problem. The combination of a 5-year guarantee and the Bosch name give peace of mind - it's early days with the new battery but the previous one lasted almost 8 years!

Quick and on time delivery. Works fine but only been a week, lets see if it can last several years ????

I have had one of these on my Saab 93 for two years without problem. Bought this one to go on another car. Arrived promptly. Super.