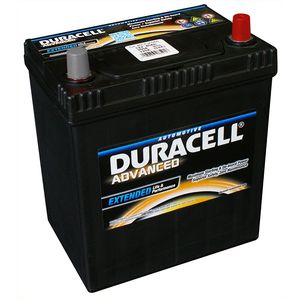 What can I say! everything was perfect in fact and happy to recommend Tayna

The battery is exactly the same type as originally supplied and was chosen as it had never given any problem until now and was still functioning 11 1/2 years later once charged. Unfortunately the mounting system required a built in retaining flange at the base which your new battery did not have, thus requiring retaining straps which my model is not designed for. Any suggestions. Kia Picanto GJ59 NCZ. Eric Cheeseman.

Customer service is second to none and a price that couldn't be beaten. A 5 star service including a Saturday delivery.

this was a direct replacement for the cars failed battery and fitted without any complications. it arrived very quickly and was near fully charged when received.

Duracell Car batteries are a revolutionary advancement in car battery technology. Combined with a "Hard-Core" battery casing and "unrivalled power output", it's a massive leap in car battery performance.