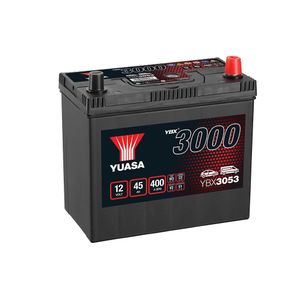 Good service, quick delivery, happy with the purchase so far.

I fitted the battery to a Toyota Rav 4 and it has given it a new lease of life....thanks.

The battery arrived on the date given and was exactly as described! Very happy customer thank you.

Excellent service and this product was a direct replacement for the Yuasa battery that was in my Toyota Corolla so it was like for like. Excellent batteries at a fantastic price. No issues whatsoever as it was a straight swap.

Good battery. Extremely well packaged and super fast delivery Will be ordering again when I need to!

Bought this as a direct replacement . Easy to order, and on time delivery. Would recommend.

This is the third battery I have bought from Tayna and, once again, delivery was quick. I emailed a query and that was answered within two hours. This battery is identical to the original equipment except the price from Tayna is much lower than the Lexus dealer price.

Just as expected. Perfect fitting. The only negative is the amount of messy polystyrene blocks which it was packed with.

Product exactly as described, and was the perfect replacement for the aging battery on my car that had let me down several times. This is the 2nd battery I've bought from Tayna, the first being to replace my motorcycle battery. Both times I've received the battery very promptly and also very well packaged. Will continue to use Tayna as and when I need vehicle batteries!

Bought this to replace the tired old battery on my Toyota MR2 Mk III year 2000. Fits with minor mod to retaining strap.Excellent service.Delivery a bit hit and miss.Arrived at 3rd attempt.

Rang the team, advised me of the replacement required. Worked perfectly thank you

fab little battery, great speedy service many thanks. will be back.