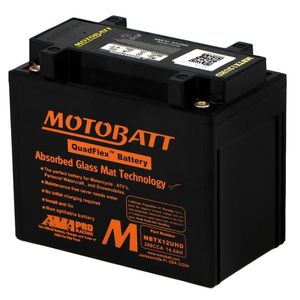 The battery was much smaller than the one it was to replace but some polystyrene packing soon solved that! Other than that there were no problems, the terminals fitted perfectly and the double terminal locations are a brilliant idea, I discounted many other options because the terminal location was reversed from what I needed. Performance so far has been great, instant starting and satisfactory on-bike charging. I would certainly recommend.

Good product. So far so good. Excellent price and very quick delivery. Started my bike on the first press. Hopefully the extra ah and cca will give it the boost it needs. Will use tayna batteries again in the future.

Excellent battery from a company to be trusted, Tanya are my first port of call when I require a battery.

Their constant innovation has led to a significant increase in cranking amps over their competitors and the invention of their patented Quadflex Technology makes installation even easier with the 4 terminal design that many of their batteries utilise.