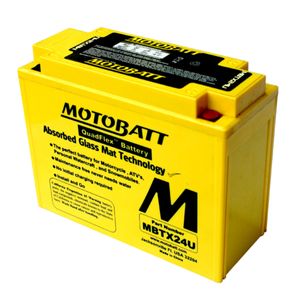 This the second one of these on my GL1500, last one lasted twice as long as any other make and always gave full power, even when not used for months. Am sure this will be the same

This is my second AGM MBTX24U battery in a short space of time. I bought the first one to try it as I'd never heard of a AGM battery before. When it was fully charged and on the bike, the bike jumped into life immediately, even thought it hadn't been started in years. It's a large bike, a Honda CBX1000. They're really had to start when they're not used regularly. That was enough to convince me that this battery was up to the job, so much so that I bought a second battery for my other CBX. I have then both on trickle chargers and the bikes bounce into life straight away with no churning over which used to happen with other batteries. These batteries are really up to the job. Both batteries were delivered quickly and the packaging of them was first class. I would certainly recommend these batteries and your service to anyone.

Everything seems fine at the moment, but I won't know how good the battery is for another year or so !

Following several recommendations from my mates I ordered a new Motobatt from Tayna, I found their price was very competitive and the website easy to navigate. The communication was excellent, there was a small hiccup with the courier service but I was kept informed all throughout. When it arrived , only 1 day later than than I was expecting, it was well packaged and I fit it and away I went. Would I recommend Tayna ? Yes I really would. Great service & good prices what more can you ask for ?

Their constant innovation has led to a significant increase in cranking amps over their competitors and the invention of their patented Quadflex Technology makes installation even easier with the 4 terminal design that many of their batteries utilise.