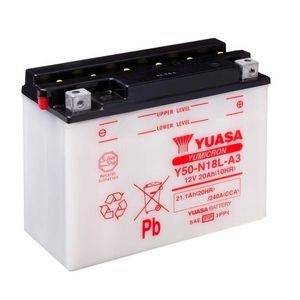 Acceptable price, excellent packing and swift delivery. I can't judge the performance of the battery until the bike has been on the road for some time. Unfortunately it is tripping the solenoid when attempting to start the bike which suggests a faulty solenoid. However, when applying jump leads from a very high capacity battery the bike starts with no problem so still a puzzle to be solved.

Battery ordered on Sunday on line and delivered on Monday. How great was that.

Had one battery arrived flat charged it would not hold a charge . returned it asked if they could make Shure the replacement was ok .but the next was flat on arrival charged that one that also went flat so that went back asked for a full refund .as no confidence in another now waiting for refund not very hopeful though

Yuasa motorbike batteries have be chosen by motorcycle manufacturers for years and remain well respected in the industry.