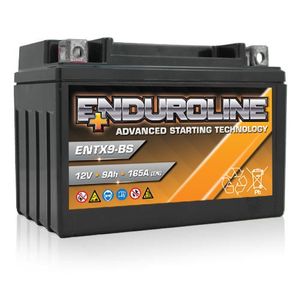 Bought it for my Wife's Suzuki Burgman, and was surprised at the performance for what is basically a budget battery. Engine cranks over faster than it did when the previous Yuasa battery was new. Best on-line supplier for batteries.

Early days yet but the service was excellent. A minor observation is the supplied captive nut for the terminal bolt is not thick enough for the bolt to "pick-up" on when the battery lead is connected to the terminal. I used the old ones.

First class product and service. Will definitely use again and recommend to friends.

Battery great, screws not quite long enough to reach fixing nuts when leads attached. I overcame problem by using slightly thicker nuts , inside the battery posts. Minor inconvenience, I'm told this is a common problem, usually overcome by lifting the nuts to contact the screws.

Good performance battery. Only criticism was that the face with the sticker must had been wiped with a solvent prior to fixing and had melted the surface leaving it very sticky.

Bought brand new last month and seems very good but it's too soon to pass opinion on long-term performance. Tayna service is excellent. Very fast. Would have appreciated warranty information with the battery. PS My other battery from Tayna lasted 5 years so I'm well pleased.

Have not had the battery for long but it does seem to spin up the engine pretty easily.

Excellent battery, the cranking ability is brilliant when compared to its size. Brought slightly taller than my original, its a tight fit but worth it. 9 amps instead of the original 6 amp battery that was supplied, which couldn't even turn the engine over.

All good, came when I was told and works very well.

very fast service and delivery 100 % A