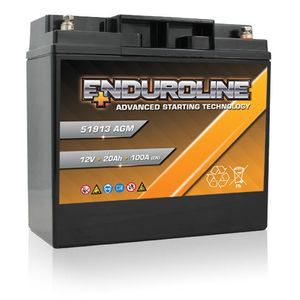 Really quick and easy and the bike starts first pick;-))

Quick delivery, did what it said on the box

Great service delivered quickly, just topped up charge and fired the bike up easily. Not quite the same size as the battery it replaced but nothing that a small spacer didn't fix. Many Thanks D Belbin

Well worth the money, quality item

Arrived earlier than expected. Connected it to bike (r1100rt) Starts up easy, even on freezing cold mornings. No complaints great battery.

Quick and efficient full marks too early to say how the battery operates just yet but looks robust.

Seems like a good battery. Fitted it and it spins the motor over nicely - much improved on the old battery which was on its last legs. Slightly disappointed that there was no documentation with the battery though - wasn't sure if I needed to charge it before use, and when I decided to do so it took 12 hours to fully charge!

I was a little concerned at first when it took my Optimate 4 a while to bring the battery to peak power. And also concerned that it would drop power after initial use. However at first use very good output was shown and a week later with cold oil and damp she cranked over well. Very pleased at this stage, thanks.

Appears a very good battery at a fair price. Quick delivery and very well packaged. I had to alter the cable connection slightly as battery lugs screw from the top rather than the side on the OE battery. Only due to being tight for space not really a problem. Would use Tayna Batteries again.

Fast delivery. This battery seems to have cured my xv 750 starting problems.

Excellent service. The battery arrived in a couple of days on standard delivery. It fitted the battery holder snuggly on my R1100rs. The terminals are screw in and flat to the top of the battery, not posts like the existing. How ever I still managed to fit both cables without too much drama. This battery adds starting power, I'm well pleased with it.

Super fast service, super well packed and a really top quality product. I will use Tanya again and recommend them. Tom

The terminals on this battery are flat to the top of the case so I had to make up some adapters using some brass strip I had available. In all other respects the battery was a good fit. The engine cranking is noticeably faster and the engine fires up straight away.

excelent delivery and product, slightly different size and fitting but really powerful. did try to log on for discount for next purchase but kept getting failed link. but happy anyway.

Received the battery on the day shown in the mail post tracking link. Was installed directly without any adaptation. Battery has a fantastic starting power, engine did not run in the last seven years and started so quickly on the first try !!!! Will check if the quality remains on long term. Currently thinking about purchasing another one for other bikes. Thanks, Francisco.

Excellent service item received really quickly, battery is so much better than the OE one, Would highly recommend Tayna and use again without question.

Excellent. Better than Odyssey P680 it replaced. Turns my R1150rs over like it was a scooter, straight out of the very well padded packaging.