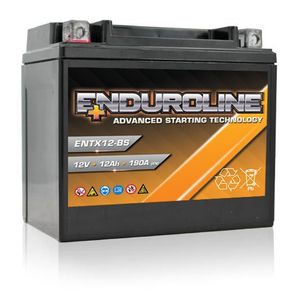 Excellent service and a great battery. Fitted with no problem and started straight away.

Perhaps a bit early to tell; but seems exactly as described and what I wanted.

Seems to do exactly what it says in your catalogue! Thanks very much!

Battery was great. The courier Yodel were hopeless and had 3 attempts at finding my address. Thanks to customer support at Tayna, another battery was sent using UK Mail which arrived next day.

Good battery and a perfect fit unlike some others.

I was impressed by the spec of the battery compared to the OEM battery it was replacing (Honda VFR750). The capacity was 12Ah compared to 10.5Ah and the cranking current was 230A compared to 180A and the dimensions were the same. The product arrived very quickly and I put it straight on the motorbike. The engine fired up immediately without any extra charging of the battery. After several weeks of stop/start useage, the battery is performing well without any problems. I have now also purchased the same battery for my Piaggio X9 250cc with the same impressive results.

Does what it's supposed to ! Fuss free !

It would have been a 5 star rating if it wasnt just a boring old black colour. Works a treat on the bike though, Super quick delivery and best price online by miles.

Fast delivery, battery appears to be excellent, bike seems to turn over faster than old battery, and starts fine. Great thanks.

All good, straight in no charge needed.

delivery service is first rate , battery came as described and fitted well , however due to it only being a short time of trial,i can not comment on the efficiency and long life of the battery as only time and use will tell

Excellent service. Quick delivery. Fitted then bike laid up for over a month (outside over winter) due to illness. Started with no issues.

Worked first go after about a 3hr charge on optimate.

Full of power to start my 1050cc Triumph. Starts 1st time now. I've replaced the Li Ion battery which was very prone to low power on cold starts/mornings. I've very happy with my new Enduroline purchase. Ordered over the phone,pm Monday it arrived am Tuesday..how good is that? Brilliant