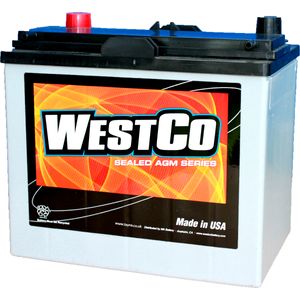 Second battery like this , the first one for a MX5 and this one for my Lotus Elise, very good battery that doesn't leak! Tayna is also a very good place to buy one, thank you.

Plug and play battery for my 1993 Mx5. The battery is slightly smaller than the genuine Mazda one, so not an OEM fit, but good enough. Super fast delivery from Tynan, received in less than 24 hrs :)

Experienced MX5 owners will know about the self discharge and charging care regime that is required when using this battery. Tayna do not include any instructions. Reference should be made to Westco data. If you look after this battery it will give long and relaible service. It is though easier to damage than many other lead acid batteries. Just in case the care needed put you off, a conventional lead acid battery won't fit in the space. You end up with a big bump in the boot carpet!

Slightly smaller than the original Panasonic battery. Didn't fit quite so well with the Mazda's restraining bar. However the battery was fully charged and is working very well.

it fits. it works. it is smaller than my old battery.

I ordered the battery and it arrived when tanya said it would. Very good service. I fitted this to a 1992 mx5 and it fitted perfectly. It is a good replacement and so far I have had no issues whatsoever

Verry good service would use again

The MX5 has restricted space for the battery so finding the exact same size was essential. Other battery suppliers had warnings about modification that might be required! Not something I wanted to entertain. This WestCo battery fitted perfectly in the space available. I managed to even get the breather pipes to re-route and fit, but I would have been even happier if the battery had come with new pipes, hence only 4 stars.

5 stars so far for such efficient delivery; the Panasonic original has lasted over 12 years although the last two were admittedly not brilliant. The new Westco was a doddle to fit and turns the engine over faster despite being slightly smaller overall. Ask me again in 10 years - I would be more than happy if I could say it's still working well!

Worth the extra cost outlay for this battery for my MK1 MX5. Has excellent starting power, especially in cold conditions. Brilliant service and battery arrived next day.

The battery arrived safely packaged the next working day after placing the order. I had to swap around the breather tubes as expected. The battery isn't quite the same size as the original Panasonic so I also needed to open out the side plates of the locating brackets a little and add a washer beween the boot floor and bracket to ensure a secure fit. The battery arrived fully charged and the car started easily first time.

Delivery excellent, battery doing fine so far. I had the same trouble as others with the breather pipes not fitting (connections not oriented as original) and the hold-down not being quite right; however it's snugly in place now.